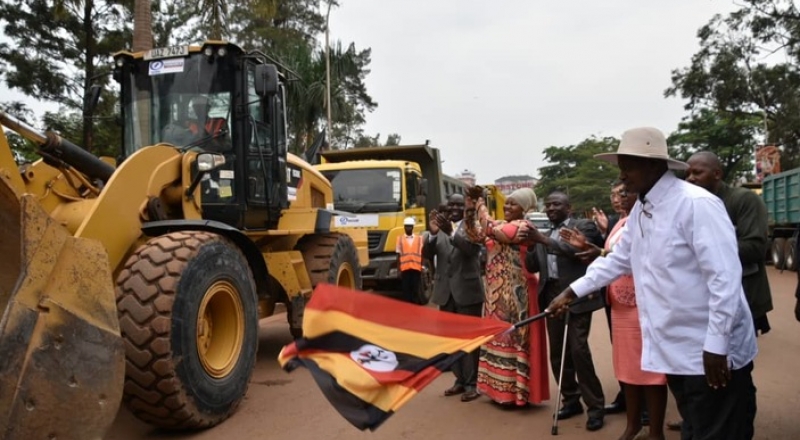 President Yoweri Museveni yesterday launched the Kampala Flyover project. In a ground breaking ceremony held at Nakivubo Blue Primary School, the President said the project was part of a series of modifications the city infrastructure is to undergo in a bid to mitigate traffic congestion and ease movements in the city.

The Clock Tower flyover Project is a precursor to similar developments, part of the city’s new Multi-Modal Transport Master Plan for Greater Kampala Metropolitan Area, seeks to phase out boda bodas and taxis, replacing them with the Bus Transit System and Rail Transit System to relieve the central business district of the distressful traffic jam. Under the grand plan, more flyovers will be built on the city’s other traffic jam-prone entry and exit points.

The first phase, expected to cost sh300b will commence at a point about half a kilometre to the South of the Clock Tower Junction, passing over the Clock Tower Junction and along Mukwano Road to the Kitgum House Junction. In addition, the project will improve existing access to roads, signalization of roundabouts, construction of an underpass (tunnel) at Nsambya area, widening Mukwano Road as well as part of Queens’s Way.

It will be funded by a loan from the Japanese government through the Japan International Cooperation Agency (JICA) with a repayment period of 40 years including a 10 year grace period for the financing of the Project.

At the launch, Japan's Ambassodor to Uganda, H.E Kazuaki Kamed reiterated Japan's firm commitment to support the growth of Uganda through infrastructure development.

Azuba Ntege, the Minister of Works expressed his gratitude on behalf of the Government and the people of Uganda for the support of the Japanese people and Government.Ntege added that Uganda still relies on its road network for the movement of over 90% of its goods and passenger traffic.

This multimillion dollar project joins a list of major infrastructural projects currently being undertaken by the government to take Uganda to the middle income status and uplift livelihoods.